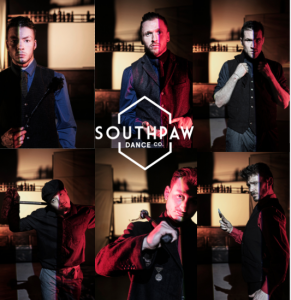 We are delighted to have been commissioned by Dance City to develop Speakeasy for touring in 2019-20.

Dance City, the North East’s leading dance development organisation, is thrilled to announce its support for the creation of 10 new works from April 2019 as part of its 2019-2020 commissioning programme.

This year saw the highest volume of applications than ever before, all of a very high standard, resulting in a lengthy and thorough selection process.

Artistic Director, Anthony Baker says, “Each of our guest panel members bring a wealth of knowledge and experience to the panel, helping us make informed, knowledgeable and fair decisions.”

Four full length commissions of the value of £5,000 each were awarded to North East artists; Gillie Kleiman, Nicole Vivien Watson, Robby Graham of Southpaw Dance and Michael Heatley of Hit the Ground Running Dance Theatre Company. These productions will be performed within Dance City’s Professional Performance Programme between 2019 and 2020.

Familiar will be a full-length evening of performance comprised of two works: one authored by Gillie and performed by theatre maker Greg Wohead, the other authored by Greg and performed by Gillie. Familiar plays out what it means to be companions, where we think we know everything about each other whilst facing the fact that we can’t. The work will be designed by celebrated visual and performance artist Tim Spooner.

Nicole Vivien Watson – Behind the Face of a Rock

Behind the Face of a Rock, Throwing Stones, is a new and artistic, choreographic work that is influenced by British Sign Language and will be made in dialogue with regional dance artists: Charlie Dearnley, and Alex Rowland, and London based deaf and professional dance artist, Chris Fonseca. The work will also feature interdisciplinary elements by Northumberland based visual artist, Graham Patterson and sonic elements by award-winning London based composer, Tom White.

Speakeasy will draw on one of the company’s most successful works, Faust, which has toured extensively outdoors, and will add indoor touring capabilities to the Company’s repertoire, bringing new audiences and new participants into indoor venues in 2019-2021. Speakeasy will feature a 1920s set, projection mapping and a cinematic soundtrack alongside the distinctive Southpaw movement vocabulary, seamlessly blending b-boying, contemporary and swing for a spectacular theatrical presentation.

In an attic at the Willard Asylum, New York, 427 suitcases belonging to Willard patients were found… The suitcases are beautifully preserved epitaphs to a few of those who lived and died at the Asylum and a poignant remembrance of the lives they left outside. Hit The Ground Running Dance Theatre Company are making a piece of dance theatre which explores the stories behind the Willard Suitcases, examines the treatment of mental health and the devastating effects on the lives it touches.