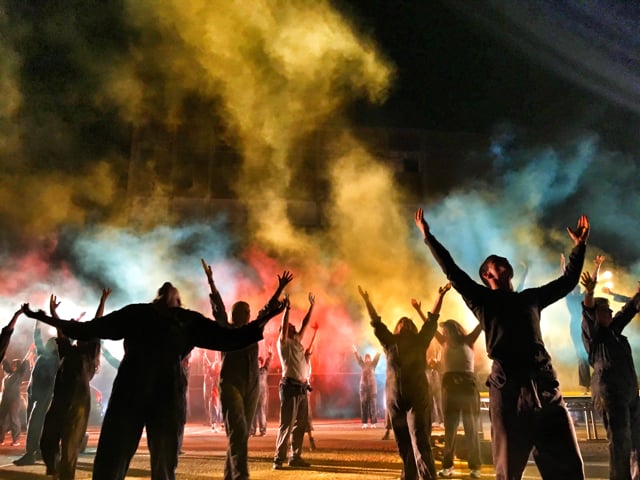 RUSH was originally inspired by the post-2008 global cultural phenomenon of protest and riot, where people all over the world are showing their dissatisfaction with prevailing social and economic conditions by taking to the streets. Mass action has become an a staple of the TV news, from the first, peaceful demonstrations of the Arab Spring, to ordinary Brazilians protesting at the waste and extravagance of the FIFA World Cup, to students and young people in Hong Kong demanding democratic rights. Many would argue that the the 2011 London riots had their origins in legitimate grievances (lack of employment prospects, alienation from local and national politics, hostility to police tactics) even though they degenerated into violence and looting.

The conversation moved on, and the 2017 iteration of Rush consisted of six weeks of dance, writing and film workshop delivery in Hull, 2017 City of Culture to derive material that formed the show. The piece follows five archetypal characters; a zero hours worker, an office worker, young mothers, a homeless character, and nurses. Through the lens of their stories we told the wider story of the issues here people of Hull face.

“You bring so much light, life, joy and kindness with you! I know you have changed our lives for the better. Thank you for RUSH Hull. It was a glorious blast!”
Elly Morlin Taylor

“What an amazing event to be a part of. I will remember it for ever and all the wonderful people involved in the whole spectacle. I felt privileged to be even performing in RUSH. I’ve never danced or performed in my life, this was my first experience. I can honestly say every member of the professional group were helpful, encouraging and so friendly to me. I shall never forget Southpaw” Carol Baldry

“An absolute privilege to have been a part of the community cast for RUSH 2017 for Hull’s Freedom Festival. A massive thank you to Robby and Co for an unforgettable experience.” Joanne Elliot

RUSH is being restaged for Lightpool in Blackpool in October 2018 and is available for touring in 2019 and beyond.

Southpaw Dance Company would like to thank Dance City, Northumbria University and Sunderland College for their support

This project was made possible with support from Hull UK City of Culture 2017, Creative People and Places Hull, Coasters Touring Network