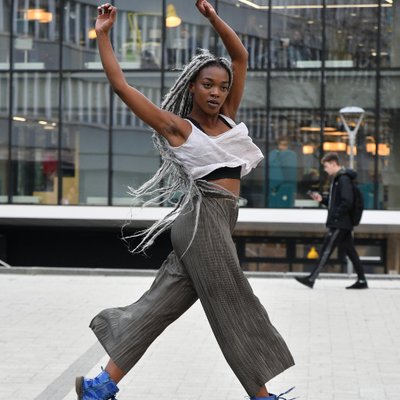 Flashpoint was part of Fully Grounded, a double bill by choreographers Robby Graham and ReGina Wielingen for Fertile Ground, which toured in 2018.

Flashpoint: Robby Graham
Robby has a uniquely compelling choreographic vision and is one of the most sought after artists in the UK. Flashpoint explores the literal barriers in Northern Ireland his home country highlighting the impact of the ‘Peace Wall’ and the flashpoints. “I grew up in Belfast looking at the wall from my garden. I went through humiliating searches every time we went through as a child, whole family turfed out of car and luggage thrown round the street. These manned gaps in the wall would act as Flashpoints for violence”.

Leemte: ReGina Wielingen
Leemte is Dutch for a space where something or someone is missing. “We wanted to be there and here. Travelled, in and out of space. So often we had trespassed, like they, our ancestors, crossing the land from one tribe to the next, from village to city to suburb.” Using text as a starting point Gina’s choreography investigates migration and how it affects our feelings of home and identity, often bringing sorrow and loss. Born in the Netherlands her own rich cultural heritage and wide travel brings a deep understanding of dispossessed peoples.