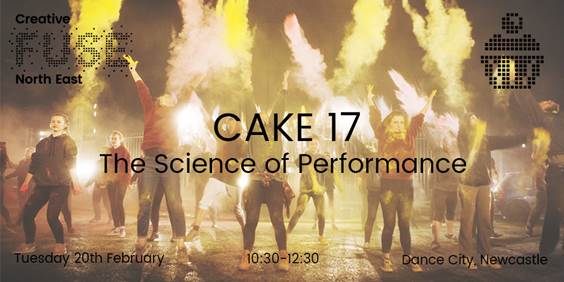 Creative Fuse North East presents an exclusive CAKE (Collaboration and Knowledge Exchange) event: ‘The Science of Performance’, in collaboration with Dance City, Southpaw Dance Company and the Institute of Physics.

The event will take a behind-the-scenes look at dance and performance, considering ways in which science and technology enhance our appreciation and understanding of the performing arts.

Our speakers will discuss the scientific principles of performance and reveal the technical skills and expertise that make a show appear seamless. From the stage to the city streets, we will consider a diverse range of performance spaces and the technologies that bring these spaces to life.

Robby Graham, Artistic Director, Southpaw Dance Company
Southpaw Dance Company works under the artistic direction and unique vision of Robby Graham who, over the last decade, has been developing a distinctive and innovative new dance vocabulary. Drawing on the relatively unexplored vocabulary of b-boying, or breaking, the Company has developed a style that crosses the boundaries of what is defined as contemporary technique and hip hop movement, engaging audiences who have never bought a ticket to see contemporary dance, as well as to sold out festivals and theatres.

Catrina McHugh, Artistic Director and Writer, Open Clasp Theatre Company
Open Clasp is an award winning women’s theatre company and a leading force in the North of England with a national and international reach. Open Clasp collaborates with women and young women on the margins of society to create bold and innovative theatre for personal, social and political change. The theatre’s women-centred practice collaborates with women to draw out their collective voices and shine a light on their experiences, creating powerful professional theatre and performing to wide-ranging audiences. Open Clasp encourages their audiences to walk in the shoes of the women and make space for debate.

Austen Atkinson, Senior Producer, Lexicon Learning
Austen is an author, producer, director, a script doctor in film and script editor for broadcast TV drama and animation. He has developed a raft of AI and VR – notably for Google and the Google Expeditions App platform, as project lead. He has created educational films, learning apps and interactives at Twig World, children’s drama for BBC Worldwide and factual programmes for BBC, History Channel, Discovery, Channel 4 and many more.  Austen trained with the BBC to be a Creative Alchemist – specialising in taking linear storytelling and developing it for immersive experiences.